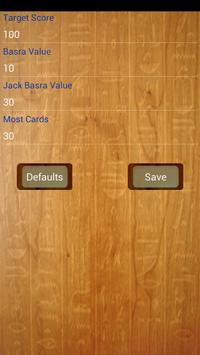 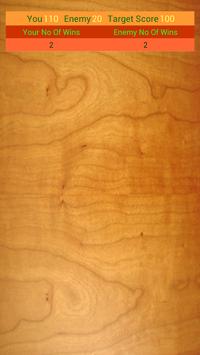 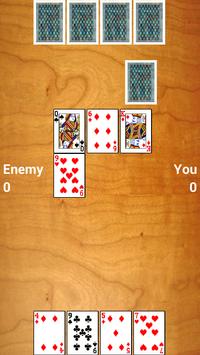 The description of Egyptian Basra App

Egyptian Basra is a very popular cards game in egypt, some times called "Al Komi" or "Ash El Walad". The Game is very simple:1- One of the two players will deal four cards for each, and in the beginning of the game he will include the ground with four ground two.2- Each player will throw one card to the ground until he is out of cards, then the dealer will deal again four cards each but not for the ground.3- Player goal is to take from the ground as many cards as he can. After the Dealer is out of cards. Each pile the players took through the game will be counted and the player who got the most cards will get the points. The other will be zero.4- What the player can take from the floor is either there is on the ground a similar card to what he has, or group of cards representing the sum in numbers to a card of his hand, the J, Q, and K are not included in the sum:- e.g. there are four cards on the floor A (have a value of 1), 7, K, and 8; if you have card 8 in your hand you will take 3 cards, the 8 and the 1+7 which equal the 8. or if has 9 he can take 8+1. If you have card K in your hand you will only take the K from the ground.5- If there is (card J or Diamond 7) in your hand you will take all the cards from the ground.6- when the ground is empty and next player throw one card of his hand (of course he will be careful not to throw J or diamond 7, these are special as demonstrated), If the other player have similar card in his hand he will take the card from the ground as additional bonus as called by Egyptians "Basra".7- the other situation to take "Basra" is when all the cards on the ground sum to one card in his hand in addition to any similar card have the same sum value:-e.g. the ground cards are (10, 5, 4, 1) and the player has 10, or (8, 7, 1) and the player has 8 … etc.8- Also in the previous situation happens and the player has diamond 7 he will take the cards on the ground as "Basra". Diamond 7 is special card that has 2 roles called by Egyptians "Al Komi"; the other name of the same game; it will take basra of any value or as the J take all the ground.9- Be careful not to hold the J or Diamond 7 as last card in your hand as the other player may take the whole ground and burn your J or Diamond 7, as he will take either of them as "Basra" next time he play.10- If the dealer is out of cards, its time to count the cards which only the player with most of the cards will take this point. Also the number of Basra taken by the two players will be counted and both will take the Basra bonus.11- Several rounds will continue in which the two players will exchange the dealing role and the other player will start first until the target score is reached, and the winner announced.